The core statistic that the HSQBRank rankings focus on is adjusted points per bonus (aPPB). This is calculated by taking a team’s points per bonus in a particular tournament, seeing how much easier or more difficult the tournament’s set was compared to a standard tournament set (NAQT Invitational Series sets), and adjusting the team’s PPB upwards or downwards based on the set’s difficulty.

To see how that works out in practice, let’s take a look at the #1 aPPB performance in the 2016-17 season, Detroit Catholic Central A playing on the GSAC set at the Shateyaronyah tournament in Ohio.

DCC put up 27.79 points per bonus on GSAC. To add to that, GSAC was, on average, one point per bonus more difficult than an IS set (that is, the average team would score one more point per bonus over the course o a tournament if they were playing on an IS set versus if they were playing on GSAC). Adjusting for GSAC’s difficulty, DCC’s performance is equivalent to scoring 28.79 points per bonus on an IS set, by far the best performance by any team not named Detroit Catholic Central this past year.

The chart below shows the points per bonus (in blue) and the adjustment (in white) for teams that made the top 8 at either the NAQT HSNCT or PACE NSC this past year on selected sets. 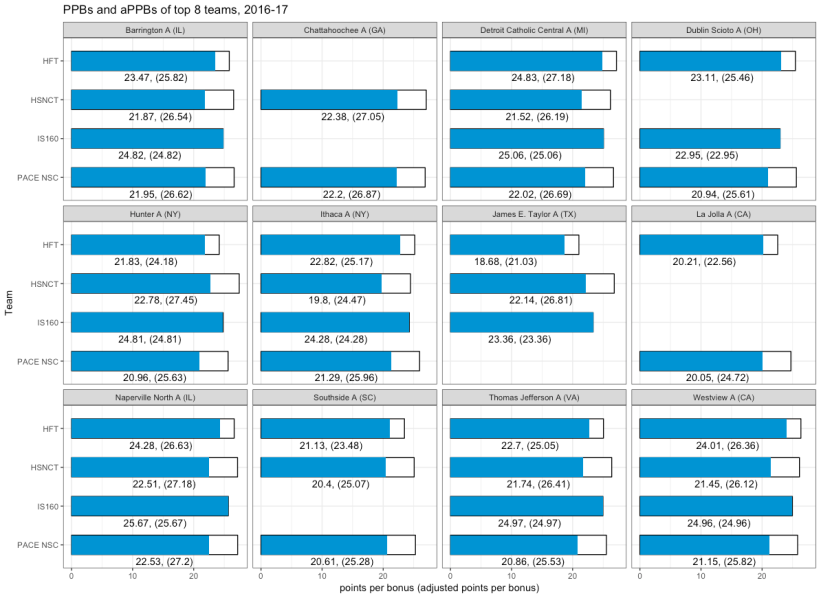 You can see how the adjustment for national tournaments like HSNCT and NSC is larger than the one for a difficult regular season tournament like the Harvard Fall Tournament to compensate for the increase in difficulty. You can also see how there is no adjustment for NAQT IS sets, since they are the standard difficulty to which other sets are adjusted. 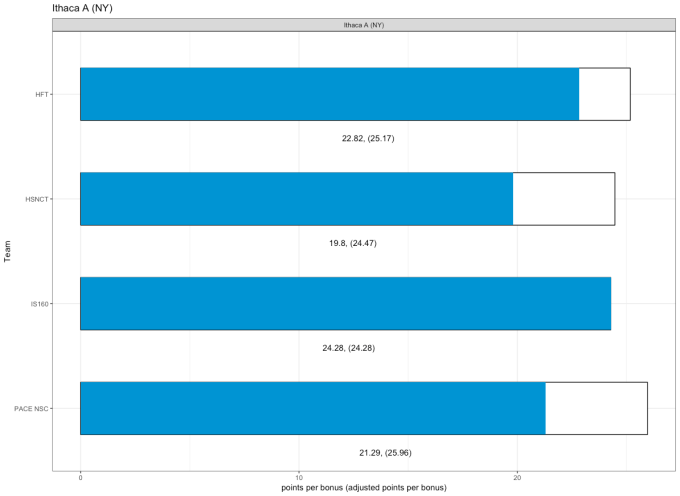 Since using aPPB standardizes for difficulty across sets, the HSQBRank rankings are calculated by looking at teams’ best aPPB performances throughout the year.